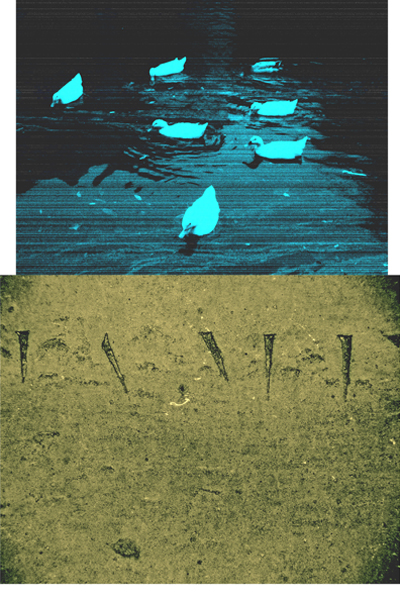 The spectral sign of imagination is superfluous and profane. It is an anti-consumerist luxury, an antidote against the poison of quantification.

It is an anti-artefact, not a psychological reflection of whatever data assigns it an author or creator. It is not a metaphor.

The material out of which this play emerges is by magic ritual and sheer chance. As the reader or viewer you are complicit in the transmission of this play.

And it is play.

The intention is not to make ‘art’ so that it becomes ‘work’ for a political or personal ideology. It is not to fulfill the purpose of an identity. In offering the ultimate, nothing needs to be qualified.

Against self-surveillance and identification, the astonishment of presence is always inconclusive.

END_OF_DOCUMENT_TOKEN_TO_BE_REPLACED 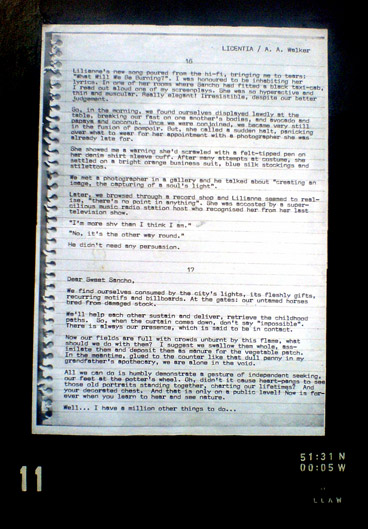 Lilliane’s new song poured from the hi-fi, bringing me to tears: “What Will We Be Burning?”. I was honoured to be inhabiting her lyrics. In one of her rooms where Sancho had fitted a black taxi cab, I read aloud one of my screenplays. She was so hyperactive and thin and muscular. Really elegant! Irresistible, despite our better judgement.

So, in the morning, we found ourselves displayed lewdly at the table, breaking our fast on one another’s bodies, and avocado and papaya and coconut. Once we were conjoined, we became very still in the fusion of pompoir. But, she called a sudden halt, panicking over what to wear for her appointment with a photographer she was already late for.

She showed me a warning she’d scrawled with a felt-tipped pen on her denim shirt sleeve cuff.

After many attempts at costume, she settled on a bright orange business suit, blue silk stockings and stilettos.

We met a photographer in a gallery and he talked about ‘creating an image, the capturing of a soul’s light’.

Later, we browsed through a record shop and Lilianne seemed to realise, ‘there’s no point in anything’. She was accosted by a supercilious music radio station host who recognised her from her last television show.

He didn’t need any persuasion.